…the imperious Author, my pal, John Holt, lays out a smorgasbord of detectives for yeez…

…the notable detective-creator, the imperious Author, my great pal, John Holt, offers the following smorgasbord of sleuth molds for yer deliberation, plus, of course, his very own Detectives, Tom Kendall and Jack Daniels… enjoy … 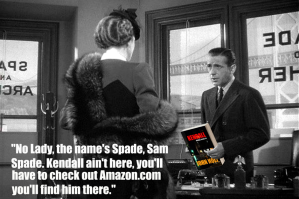 Handy with their fists, and a gun, and quick with the wise crack. They are tough talking, and hard hitting. Or perhaps you prefer the more methodical type, the ones with the little grey cells, who work on psychology. Nothing and no one can fool Poirot. Nothing gets past him. It makes you wonder why anyone would even consider committing a crime knowing he was in the same house, or at least close by. But they always do whether it is at a county house called Styles; in Mesopotamia, or on a Nile cruise.

How about that deceptively quiet and unassuming, Miss Jane Marple? 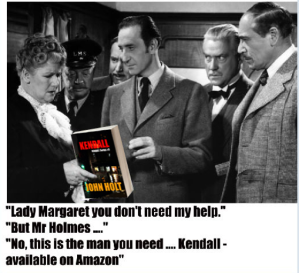 An irritant to some maybe, but she would always outsmart the cleverest policeman, and solve the most complex crime imaginable. And all while she carried on with her knitting. Then there is possibly the greatest detective of them all, Sherlock Holmes. Logic and deduction are his watch words. Give him a few strands from a man’s scarf, and he will not only deduct where the scarf was purchased, and how much it cost, but will also be able to tell that the man was thirty-eight years old, with dark wavy hair, six foot two in height, walks with a limp, and had kippers for breakfast, named William, (the man that is, not the kippers. I don’t know what their names were).

How about Inspector Jacques Clouseau? “I suspect everyone, and I suspect no one.” No matter how bumbling he was, or how silly, he still, somehow, “Solv Ed” the crime. Generally by accident admittedly.

Then, of course, there are a whole plethora of television detectives. Who can forget Kojak, and his lollipop, with his catch phrase “Who loves ya baby?” Or Sergeant Joe Friday – “Just the facts ma’am.”

Columbo is more to your taste, with his “Just one more thing.” We all know what that meant don’t we? There are a whole collection of them – Magnum; Jessica Fletcher; Rockford starring the late great James Garner; Ironside; Cagney and Lacey; Morse; Starsky and Hutch; 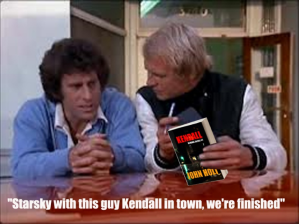 to name but a few.

Then, of course, we have Tom Kendall, private detective. He really wanted to be a Private Investigator, but that was judged to be far too long to fit on the office door, so detective it was. Kendall is a down to earth guy, slightly over-weight, far from fit, and suffers with hay fever. Stubborn, who once he had an idea, he would never let go. He is ably assisted by Mollie, his secretary and business partner – their relationship is purely platonic – and first appeared in “The Mackenzie Dossier”, a story of political corruption, blackmail and, of course murder.

The latest in a long line of detectives, is Jack Daniels. That’s right, just like the whiskey. Jack likes Chinese takeaways, from Mr Chang, or maybe a pizza from Mama Dell. His favourite pastime is to put his feet up, a large scotch in his hand, and then put on some blues records, John Lee Hooker or some Big Bill Broonzy. Or maybe he’ll be down at the 51 Club, watching a blues combo.

Jack has been a detective for quite some time. He’s laid back, and world weary. He’s seen it all before. But he can’t help forever butting his nose into places where perhaps it shouldn’t go. But sometimes that can end up in a whole lot of trouble. That’s what happened to Jack when he went in search of “The Candy Man”.

To date Jack has appeared in three short novels – “The Candy Man”; “A Dead Certainty”; and “Trouble In Mind”. All three are available on Amazon, and all three are now available as audiobooks.

…thanks, John… there yeez are, readers… whetted yer appetites, I’m sure…

8 responses to “…the imperious Author, my pal, John Holt, lays out a smorgasbord of detectives for yeez…”