…Barb Taub… unplugged!… oh, and a wee bit about her book, ROUND TRIP FARE…

…pin back yer eyes, brains, and risible nerves for a terrific Guest Post from my great pal, Authoress Barb Taub… 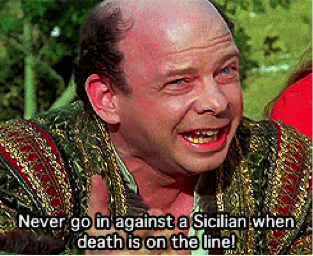 “You fell victim to one of the classic blunders. The most famous is never get involved in a land war in Asia. But only slightly less well known is this. Never go in against a Sicilian when death is on the line.” [Image credit: The Princess Bride, 1987, Writer: William Goldman]

It ain’t what you don’t know that gets you into trouble. It’s what you know for sure that just ain’t so. —Mark Twain

There are plenty of things our old friends, the Everyones, say:

And they’re right, of course. Except when they’re not. Sometimes a little tell gets you out of a painful lot of show. Sometimes what you know isn’t nearly as much fun as what you can make up. And sometimes, Scottish writers living in Abu Dhabi will totally rock the plaid.

The trick here is to take the things you do know, the things you do want to tell, and maybe even a bit of unapologetic plaid attitude, and sneak them in under the table where people won’t notice them. At least, not right away. In my new book, Round Trip Fare, for example, heroine Carey Parker is a young Warden working for the secretive Accords Agency. In writing about her office, I might not have firsthand knowledge of paranormal bounty hunters, and the accountants I’ve worked with were not (to the best of my knowledge) were-badgers. But after decades in the human resources trenches, I know some things about workplaces and bureaucracy.

No matter what happens to employees under the full moon, I know their offices will have scribbled threats against people who steal food from the staff fridge, and notices threatening those who take the last of the coffee without making another pot.

There will be plenty of policies from Human Resources, most likely collected into a manual that nobody actually reads.

And of course, there will be those random memos from management (which will, for the most part, say exactly the wrong thing). 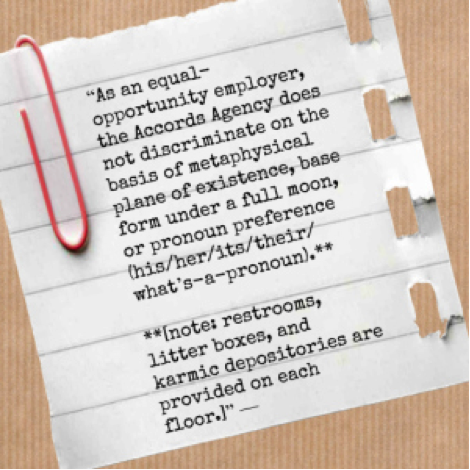 I also know what Carey’s coworkers will be like. In staffing the Accords offices, I’ve added a few that I’ve met personally over the years. They’re the ones who misunderstand directions, exchange endless emails—with half the company copied in—only to raise even more questions about each answer. Despite being completely contradictory themselves, they urge others to be “reasonable” and avoid haste which might result in embarrassments or difficulties later on. And of course, they have a particular gift for spreading disturbing rumors that sound like inside dope. 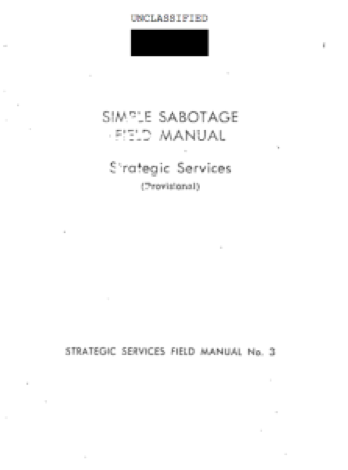 Sound familiar? Admit it—you’ve worked with them too. What you and I may not have realized, however, was that all of this might be deliberate.

Perhaps our guacamole-for-brains colleagues are actually spies working for the CIA. I know this is a possibility, because I’ve read a recently declassified CIA file which contains the training materials for simple workplace sabotage. Using these methods, employees following some easy steps can bring down even the largest organizations. And aren’t those steps eerily familiar?

And by the way, writers—if you’ve already created a workplace that puts the fun back in dysfunctional, the CIA has yet another gift for you. For over twenty years beginning in the 1950s, Modern Art was a CIA weapon. 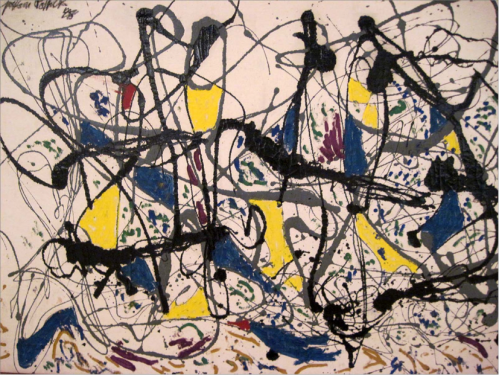 I could NOT make this stuff up. But I did make up Carey’s adventures in Round Trip Fare. I hope you’ll take a look.

[click on image for preview and reviews from Amazon]

ROUND TRIP FARE by Barb Taub

Warden Carey Parker’s to-do list is already long enough: find her brother and sister, rescue her roommate, save Null City, and castrate her ex-boyfriend. Preferably with a dull-edged garden tool. A rusty one.

And then there is… him. For the past two months, a dark stranger has persistently edged his way onto the mental game board behind her eyelids. Well, whatever trouble he’s selling, Carey Parker is not buying.

Carey knows superpowers suck, her own included. From childhood she’s only had two options. She can take the Metro train to Null City and a normal life. After one day there, imps become baristas, and hellhounds become poodles. Demons settle down, join the PTA, and worry about their taxes. Or she can master the powers of her warrior gift and fight a war she can’t win, in a world where she never learned how to lose.

It just would have been nice if someone told her the angels were all on the other side.

In halcyon days BC (before children), Barb wrote a humor column for several Midwest newspapers. With the arrival of Child #4, she veered toward the dark side and an HR career. Following a daring daytime escape to England, she’s lived in a medieval castle and a hobbit house with her prince-of-a-guy and the World’s Most Spoiled AussieDog. Now all her days are Saturdays, and she spends them traveling around the world, plus consulting with her daughter on Marvel heroes, Null City, and translating from British to American.

…there yeez have, it Lads and Lassies of Blog Land… go seek out ROUND TRIP FARE… a terrific offering from a terrific Authoress…

14 responses to “…Barb Taub… unplugged!… oh, and a wee bit about her book, ROUND TRIP FARE…”