…born Scottish, it’s almost expected that ‘charity’ for me should be a foreign concept (a false rumour propagated for centuries by Englishers with deep pockets and short arms)… putting that fib aside, I’ve found over the several years that I’ve been scribbling, I’ve grown more and more reluctant to give my WURK away for free… the Great God Amazon Kindle has several shuffles on a theme which ‘allow’ an author to offer his/her masterpieces for NUTHIN…Zilch, Nada, Libre… and in the early days of my efforts to ‘get out there’ in the universal readership, I mixed and matched my price levels… it became easier as a back list of titles developed… I could offer a title for free for a limited period, but attendant another title at regular pricing… and that seems to sit well with readers… earlier today I read a shared post on Facebook which highlighted a superb Readers Survey Report done by Marie Force, which carries a lot of excellent insight into the ‘user market’ of readers these days … I’m delighted to see that much of it reflects my own experience (distilled by trial and many errors)… in essence, we newbie Lads and Lassies of Blog Land are unlikely to gain much download traction without initially offering sum’thing in the way of either Freebies or low-priced first titles… it’s a not-so-unusual mechanism used with many other business products to generate awareness… as an author adds a ‘back list’ of titles, then it’s easier to increase pricing for some offerings… for example, my current masterpiece production line has birthed four Jack Calder crime thrillers… present pricing strategy will include keeping the very first novel at the lowest Amazon price break at which it attracts the 70% royalty, i.e. USD 2.99, the middle two will go out at USD 3.99, and the latest title, due for launch in a coupla weeks, KILLER CITY, will attract USD 4.99… that stated, the first week for the launch will see a ‘bait’ price of 99p/99c, after which it will revert to the USD4.99 price… the fascinating major point for my  eyes in Marie Force’s report is that readers are NOT hung up on pricing, and lower pricing in itself is NOT a determing factor in purchases… food for thought… see yeez later… LUV YEEZ!…

…meanwhile, here are the pre-order links for KILLER CITY at that precious one-week-only price level of 99p/99c… fill yer boots : 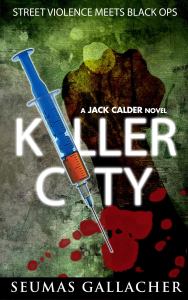