Hello, Seumas! Thank you for inviting me onto your blog to talk about my novel, Revolution Day, published yesterday by Crooked Cat.

Revolution Day, my second novel, follows a year in the life of Latin American dictator, Carlos Almanzor (my first, Zeus of Ithome, is a historical novel set in ancient Greece). Now in his seventies, Carlos is feeling his age and seeing enemies around every corner. And with good reason: his Vice-President, Manuel Jimenez, though outwardly loyal, is burning with frustration at his subordinate position.

Carlos’ estranged and imprisoned wife Juanita is writing a memoir in which she recalls the revolution that brought him to power and how, once a liberal idealist, he changed over time into an autocrat and embraced repression as the means of sustaining his position.

When Manuel’s attempts to increase his profile are met with humiliating rejection, he resolves to take action. As he moves to undermine Carlos’s position and make his own bid for power, Juanita will eventually find herself an unwitting participant in his plans. 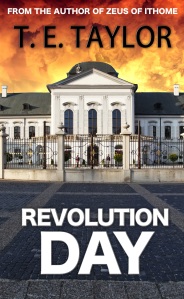 Here’s a brief excerpt – an incident that helps to explain Carlos’ paranoia:

“Amid the stillness, a small object flew from the east towards the west side of the square. It might have been mistaken for a bird, but some people noticed its parabolic trajectory and the fact that it was tumbling end over end. Before anyone could react, the object exploded harmlessly in mid-air with a small puff of smoke and a loud crack. All eyes turned towards the sound, including those of the police and the soldiers, who instinctively turned their rifles towards it.

In that second, from the east side of the square whence the object had come, a long-haired figure forced its way through the crowd and leapt over the barrier. It raised its arms, pointing them towards the President, and from a small silver object in its hands came a flash and a second sharp crack. Every eye, and every rifle, in the square now turned towards this new sound. There were five more bangs, louder and deeper than before. The figure staggered, dropping the silver object, and blotches of red appeared upon its white t-shirt. It stumbled backwards and fell over…”

If your readers are intrigued, they can find out more on my website and Facebook author page. Thanks again for hosting me, Seumas!

Tim Taylor was born in 1960 in Burslem, Stoke-on-Trent, UK. He grew up just outside the city in Brown Edge, then at the age of 11 moved to Longsdon, near Leek. Tim went to Newcastle-under-Lyme High School, then studied Classics at Pembroke College, Oxford. After graduating he moved to London and spent a couple of years playing guitar in a rock band. When it became clear that he was never going to be a rock star, he sadly knuckled down and joined the Civil Service, where he did a wide range of jobs before leaving in 2011 to spend more time writing. While still in the Civil Service Tim studied part time for a PhD in Philosophy at Birkbeck, University of London, achieving it in 2007.

Tim married Rosa Vella in 1994 and their daughter Helen was born in 1997. In 2001 they moved to Meltham, near Huddersfield, and have lived there ever since. Tim now divides his time between creative writing, academic research and part-time teaching and other work for Leeds and Huddersfield Universities.

Tim’s first novel, Zeus of Ithome (a finalist in the Chaucer Awards for historical fiction), was published by Crooked Cat in November 2013; his second, Revolution Day in June 2015. He has also published a non-fiction book, Knowing What is Good For You (Palgrave Macmillan 2012), on the philosophy of well-being. As well as novels, Tim writes poetry and the occasional short story. He also plays electric and acoustic guitar and a little piano, and likes to walk up hills.

…thanks for the post, that man, Tim… see yeez later… LUV YEEZ!…