…today, great delight is mine to host Authoress, Anne Allen, to introduce her new off’ring…

…this ol’ Jurassic’s one of the most fortunate Bloggers in the WURLD, coz so many of my terrific pals are comfortable enuff in sharing their stuff on here… today, great delight is mine to host Authoress, Anne Allen, to introduce her new off’ring…

Thanks so much, M’Lud, for allowing this humble scribbler to grace your august blog. My words will shortly wing their way to the hot deserts and mighty buildings of Abu Dhabi while I stay tucked away in my seaside garret. The wonders of the internet!

I’m here to talk, ahem, with suitable writerly modesty, about my latest production. The fourth in The Guernsey Novels, The Family Divided, is launching on June 15th– but available for pre-order here http://amzn.to/1FBhzI0 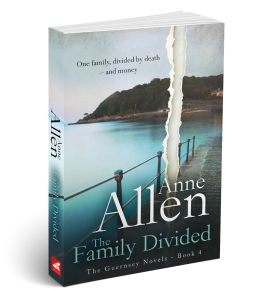 For those of you lovely people who haven’t a clue who I am, may I start by giving you a little background information? I was born in the middle of England, as far from the sea as you can get, but was lucky enough to have a Welsh-born father with parents in Anglesey, North Wales. This wondrous fact enabled us to spend summer holidays merely yards from the beautiful beaches of Rhosneigr. From there, dear readers, a love affair was born. The sea and seashore.Many years later, after some heartache and tragedy, I eventually landed on the shores of Guernsey, three children in tow. The love affair was re-kindled and continues to this day. I reluctantly left Guernsey after nearly fourteen years on the island working as a psychotherapist and landed back in England. Some years later I wrote my first book, Dangerous Waters, as a homage to the island where I had been so happy. This homage has continued, much to my surprise and delight, with the further scribbling of tomes forming The Guernsey Novels. The stories are a mix of romance, mystery and family drama. So absolutely no guns, knives and mass killings, Mr Gallacher! Although people do get killed in suspicious circumstances…

The Family Divided follows the quest of Andy Batiste to find out what really happened to cause the family division, costing his father, Jim, his rightful inheritance. Andy’s grandfather, Edmund, the eldest son of the family, was killed during the German Occupation, shortly after being labelled an informer by, amongst others, his younger brother Harold. Edmund’s widow was ostracised by the family and neighbours and fled to France as soon as the war ended, not knowing she was pregnant with Jim. Years later Jim and his wife land in Guernsey but are not accepted by the family, now headed by Harold, who has inherited the family farm and various properties. Once Jim retires he and his wife struggle financially and Andy is determined to achieve justice for him.

At this point Charlotte Townsend, divorced, lonely and suffering from writer’s block, turns up at La Folie, the natural healing centre in Guernsey where she had stayed earlier that year. She meets Andy and is intrigued by his story and offers her help. Together they make a good team, in more ways than oneAll the books in the series are standalone, but they are linked, with various characters continuing to pop up, like members of an extended family. The fifth, Echoes of Time, is incubating as we speak.

To find out more about me and my books, please visit my website www.anneallen.co.uk

My amazon page is http://bit.ly/anneallen

…there yeez go now, Lads and Lassies of Blog Land… the new title is ready for pre-order and the others are worth popping onto yer Kindles as well… cheers… see yeez later… LUV YEEZ!…

21 responses to “…today, great delight is mine to host Authoress, Anne Allen, to introduce her new off’ring…”