…a neat wee diversion here for yeez in the form of a Guest Blog post from a fellow-Celt, Author David Williams… today I’m bestowing on him Honorary Scotsmanship, for reasons yeez’ll quickly understand as yeez read his piece below… enjoy…

Master Williams in his highly effective undercover camouflage as a Scot: 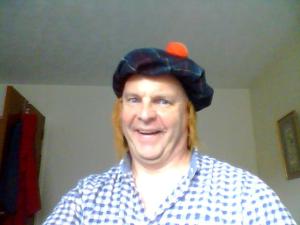 The reason I like Scotland, world traveller Seumas Gallacher’s home country, is for the following reasons, laid bare in this guest blog post, an opportunity kindly provided by the man himself. As a writer, I always start with place, the title of my own blog post is http://www.sharkfishinginwales.blogspot.co.uk The first time I visited Scotland was on a family holiday circa 1978/79. We stayed in student accommodation in Stirling University, not realising that it was a hotbed of student, radical politics. My father’s Brown Triumph Dolomite was misbehaving and an AA patrolman dutifully turned up and I knew that these were different people when he found out that we were a Welsh Family when he said “Things are hotting up down there with you”, he was referring to the Holiday Home Burning Campaign by Meibion Glyndwr.

We went to the Battlefield of Bannockburn, we went up the Wallace Tower. We took a ferry across Loch Katrine in the Trossachs. The country was impossibly romantic and atmospheric. My second visit was as Hooker for the school rugby team when we visited Dumbarton Grammar School circa 82/83. We played, hungover and queasy on the Saturday morning and then headed over to Murrayfield for the afternoon game which if I remember rightly Wales won. We won the school game narrowly and the strangest re-union happened recently because I am an unemployed writer so when signing on for Job Seeker’s Allowance in Cardiff I thought I would be an awkward sod and ask for a Welsh Speaking member of staff and who turned up but a Scotsman who had met and married a Welsh Speaking lady and had played in the second row for Dumbarton Grammar School, all those years ago. He had learnt Welsh and was now speaking with me his former rugby adversary. When people say it’s a small world, it certainly was that day.
In the early 1990’s I went to a friends’ wedding. He was from Watford and she was from Balloch on the shores of Loch Lomond. They were to be married at the Loch Lomond Hotel. Two days before the event. The Loch Lomond Hotel burned down and we witnessed the burning as we drove passed. Last minute arrangements changed the venue to the Trusthouse Forte hotel in Glasgow. Two most recent visits have seen me go to Oban, Fort William, up Ben Nevis, over to Inverness, down to Aberdeen and then a few days at the Edinburgh Fringe Festival because it is Theatre Writing that takes my main interest. I have just successfully completed an M.A in Playwriting at the University of Salford and my dramatic writing can be seen on http://www.redbuttontheatre.co.uk.
I am fascinated by two Scotsmen, George Galloway and William Topaz McGonagall. George because of his fearlessness and McGonagall because my poetry follows his in quality and quantity. One question that I will direct to Seumas as I know that he was a professional football player before turning his expert hand at thriller writing and self help books Why are so many Scotsmen, successful football managers? What is it in the water that makes them such good man managers? (Seumas here: quite simply and modestly, we ARE the people!)
My last visit to Scotland, I visited Culloden Field, I have to admit to being a big fan of Alex Salmond and the Independence Campaign. I was very much in the Yes camp. At Culloden, we were shown a film of the history of the battle, the last man to leave the film screening was an American called Gus, his wife had to drag him from there and she also had to push him on the bus as he could not take his eyes off the battlefield. You can take the man out of Scotland but having known Seumas for a short time and seeing Gus in action, I realised that you can ne’er take Scotland oot the man!
******
…not only does the intrepid David do Braveheart impersonations, he has two terrific blogs as indicated in the text above, which I fully recommend to yeez, Lads and Lassies of Blog Land, but he can also be followed on Twitter on @davidredbutton and on Facebook under David Red Button Williams… here’s a cover page of one of his literary masterpieces for yeez:

http://chipmunkapublishing.co.uk/shop/index.php?main_page=product_info&products_id=2571
…thanks for the visit, that man… see yeez later… LUV YEEZ!…
ALL MY BLOG POSTS ARE FREE TO SHARE OR RE-BLOG SHOULD YOU SO WISH—BE MY GUEST!